We will never forget you…

He was ‘only’ a street cat, but simply something very special. He appeared years ago on the feeding site on the mola, his fur so encrusted that the vet had to cut it first. Then he loved it every day to be brushed. From whence he came, he has never told us. But probably times ago he must have been a family pet, because he was not at all shy, but trusting to all people.

All who came, stopped to welcome Bärle and to pet him. And his godmother from Berlin sent him treats, which he gladly shared with his comrades and friends of the feeding site. But one day, Bärle came hobbled on only three legs, the fourth so strangely angled. We took him to the vet, and the x-ray showed that the thigh was severed. Obviously he had been left after he had touch with a car. He must have suffered very much. A surgery is a risky thing with an uncertain outcome. They told us that the best was to redeem him. He was in the cage under anesthesia, and looked so peaceful. It was very difficult to abandon him. But the vet said he could feel the caress in anesthesia. He would be going to sleep more easily and should suffer no longer.

He leaves a big gap and we miss him very much. The other animals at the feeding site will miss him too, especially Opachen and Tony, and also the one-eyed Lilly, with whom he shared every tasty treat. Now he’s resting under the large olive tree.

unfortunately I must announce full of sadness and bewilderment, that Max has gone over the rainbow bridge on Tuesday 06.07.2010 absolutely unexpectedly for me at this time. Unfortunately, we could not help his problem with his lung despite the best medical treatment. He had still a very nice time with us.
Max will be very grateful to you for your help. 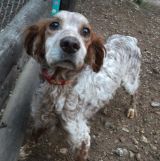 On September 07th, 2010, we met Tom with Araceli in Montuiri the first time. He was skinny and suffered from heavy diarrhea. We spontaneously offered to take him with us and thus in veterinary treatment, but Araceli refused our offer. Therefore, we drove the next day again to her accompanied by a veterinarian. He got a syringe and drugs for the next days. What we did not know that Araceli treated all diarrhea diseases only with gift of lemon water. With absolute conviction. whether it were tiny kitten or sick dogs… everytime we brought over her food, we asked whether we may take Tom with us … Never got a “Yes”. Until mid-October, a call came from Araceli, we needed to get Tom “now!” and bring him into a veterinary clinic. So we drove there immediately – and were shocked: the pretty male dog was totally dirty and full of excrements and weighed scarcely 13 kg as the veterinarian noted. Tom was totally apathetic and very yellow… its liver-and kidney values completely low. The excrements liquid like water flowing out of his backside.
In the clinic we and the veterinaries fought almost a week for him – until we had to let him walk over the rainbow at 21st of Oct. 2010. His death makes us infinitely sad, because it would have been most likely to prevent.
Lara is an old ratero girl, which is very sick. It has lymph gland cancer in the final stage. Their owners could no longer foster her, that is why she came to us. Lara gets her charity here and for the reason she has not long to live, we make every day special for her. She lives in the house and gets all love that she needs to be happy. Every evening Lara is fond of her “extrawürstchen” without knowing that her medicine is hidden in it. Lara lost her fight on March 3, 2011, she has left us and we all are very upset and sad. We will miss Lara very much…

Monty, our English Bulldog has left us suddenly. In the evening at 7 p.m. he fell suddenly and lost conscience. We took him to the vet clinic but unfortunately he did not make it any longer. He died of an acute kidney insufficiency. We all are infinitely sad and shocked.
Cera has walked over the rainbow bridge. She was a very lovely she dog, who died of a broken heart. Because her owners just have left her on the island. All love and affection did not help. At the end her kidneys stopped working. Cera was just 11 years old. 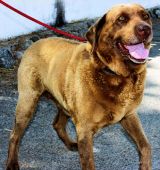 Just before Christmas we took over Samurai from the public shelter, because he would have died there instantly. Our vet has done everything for him, and it initially looked as if he’s better. He was completely in his bones when he came to us, but had such a healthy appetite, that he was a handsome dog quite quickly again. He was even allowed to move into a great foster home, where he showed but soon neurological deficits.

Apparently he had been beaten on the head so hard that irreparable damage had arisen. One day, he fell again and could not get up. The vet has advised us then, to redeem him, what we have done with a heavy heart. All who cared for him so touching, thank you very much. We hope that you, little Samurai, every now and then will look down on us from dog’s heaven! Rest in peace.

Our little Timo has just gone over the rainbow. After a long illness he was in his bed on the terrace, falling asleep very stress free. I was with him and told him that now will come a better time for him and that there are waiting many friends for him in dog heaven. On our pet cemetery he gets a particularly beautiful spot. I will never forget you, little Timo.